Zelengora is an immense expanse, interspersed with green forests and even greener meadows and pastures. The particular charms of Zelengora are its “mountain eyes” – clear glacial lakes in which mountain peaks covered with snow are reflected.

Adorned with coniferous forests, splendid glacial lakes, and vast mountain pastures, Zelengora Mountain is rightly named the most beautiful and gentlest mountain of the Dinaric Alps. Green mountain, whose name speaks for itself, is an immense expanse interspersed with green forests and even greener meadows and pastures. Even though the imposing mountain peaks (Vilinjak, Bregoč, Stog, Orlovac, Planinica, Klek, Uglješin vrh) jut out from it, it is a gentle mountain, quite the opposite of Maglić and Volujak, from which it is separated by a deep canyon of the river Sutjeska.

The particular charms of Zelengora are its ‘mountain eyes’ – clear glacial lakes located at the foot of its peaks, at an elevation between 1.380 and 1.650 meters: Gornje Bare, Donje Bare, Orlovačko Lake, Kotlaničko Lake, Štirinsko Lake, Borilovačko Lake, Crno jezero (Black Lake), and Bijelo jezero (White Lake). The water of these “mountain eyes” is so clear that the peaks of the surrounding mountains are reflected in it. There are five lakes inside the Park’s borders: Crno jezero, Bijelo jezero, Orlovačko Lake, Donje Bare and Gornje Bare. Two out of three lakes outside of the park are natural – Štirinsko and Kotlaničko Lake and the third one – Borilovačko Lake is artificial. They are also under the watchful eye of the National Park Sutjeska. These lakes are an oasis for nature lovers. The untouched nature reflected in the glistening water represents an incredible view.

Orlovačko Lake is located at an elevation of 1.438 meters and belongs to the group of cirque lakes. It is surrounded by picturesque meadows and hills, above which the slopes of Zelengora rise. The length of the lake is about 350 meters, the width is about 100 meters, and the average depth is about 5 meters. In the summer, it is very pleasant to swim in. The lake shore is slightly sloped and both the bottom and the lake shore are covered with water plants. East of the lake there are peaks Orlovac and Orlovača, in the southeast, a two-hour walk away from the lake, there is the highest peak of Zelengora – Bregoč (2.014m), in the south Stog (1.821m) and in the north Ljeljen (1.765m). The lake is home to brown trout, Arctic char, and rainbow trout. Guests can rent a mountain hut for accommodation and stay not far away from the lake. The house has two bedrooms for four people, a living room with a fireplace in it, a kitchen, and a bathroom. For decades, camping has been the preferred way of staying and resting in the Park for many people. Camping in the Park is allowed in places approved for it by the Park management. There is a campsite in Tjentište, and people most often camp by Orlovačko Lake. 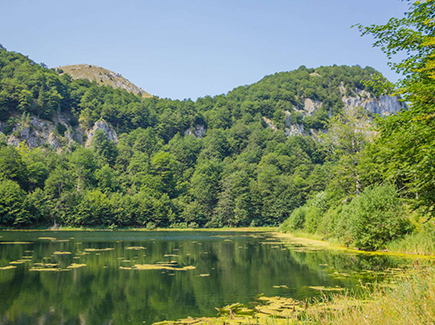 Lake Donje Bare is located at the foot of the northwest side of Mountain Tovarnica and its peak Planinica (1.722 mamsl). In the northeast, there are mountain meadows with small ponds rich in marsh flora. The lake is at an elevation of 1.500 meters, it is 200 meters long and 140 meters wide, with a maximum depth of over 4 meters. It receives spring water from many sides including one of the biggest springs found on the west side. The irresistible beauty of this place won the heart of former Yugoslav president Josip Broz Tito, who had a mountain hut near the lake. Nowadays the remains of the hut can be seen near the mountain hut of National Park Sutjeska. The place is perfect for a pleasant active holiday because it offers the possibility of multi-day hiking tours which lead to panoramic views of mountain Maglić, primeval forest Perućica, and other landscapes. Taking an easy trail 1.2 kilometers long that stretches from Donje Bare to the edge of the Sutjeska Canyon, you can come to the lookout point Borić. From the lookout point Borić, which is at an elevation of 1.475 meters, you can see the whole canyon of the river Sutjeska, mountains Vučevo, Maglić, Volujak, primeval forest Perućica, Dragoš sedlo, Prijevor, the valley of Tjentište, the remains of the old towns Vratar and Vratac, as well as Kosman. Donje Bare Lake is among the most special and most beautiful lakes in the Park. This place has always been and will always remain a memorial for the Partisans who died defending their country and people from the larger and superior German army. Mountain hut Donje Bare located by the lake is available for rental. It has two bedrooms, a living room for seven people with a fireplace, a kitchen, and a bathroom. Behind the house, in the westernmost part of the lake, there is a water spring.

A three-kilometer long trail from Lake Donje Bare leads to Lake Gornje Bare, which is only about 150 meters long, about 80 meters wide, and its maximum depth is about 2 meters. The lake is at an elevation of 1.640 meters and apart from the beautiful landscape, it also represents an important waypoint. It is located on the east slopes of Uglješin vrh (1.858 mamsl), mountain massif Tovarnica, between the peaks Dobra (1.795 mamsl) and Planinica (1.722 mamsl), and in the northeast it is surrounded by Medvjeđe brdo with its peaks Mala and Velika Siljevica (1.710 m и 1.720 m).

Crno jezero (Black Lake) is on the slopes of beautiful mountain Zelengora, located at an elevation of 1.450 meters. It is surrounded by mountain peaks: Orlovac (1.962 mamsl), Orufe, and Orlovača (1.959 mamsl) with scree slopes. This small lake is rich in brown trout because of the strong freshwater inflow. It is about 85 meters long and about 60 meters wide. Its maximum depth is about 4 meters. The lake shore is swampy with humus covering not only the shore but the bottom as well, hence the name Black Lake. In the northwest, you can see the slopes of Orlovac covered with spruce and in the southeast, there is a beech forest that reaches the lake shore.

Only 500 meters south, there is Bijelo jezero (White Lake), although it is also called Green Lake because of its color. It is round and its diameter is 40 meters. It is 3 meters deep, and its elevation is about 1.500 meters, but there is no fish in it.

Štirinsko Lake is the biggest lake on Zelengora. It is about 600 meters long, 350 meters wide, and its maximum depth is 4,5 meters. It is located at an elevation of 1.672 meters. It is surrounded by peaks Dumoš, Todor (1.949 mamsl), and Osredak (1.828 mamsl). It is home to Arctic char. Near the lake, there is a necropolis with 80 tombstones called stećci, between Klek and Štirinsko jezero. The stećci are decorated with plastic. The necropolis near Zavidež has 15 tombstones which are not decorated and are, unfortunately, sinking.

An hour’s walk from Štirinsko Lake there is a very beautiful lake – Kotlaničko Lake. It is located in beautiful surroundings at an elevation of 1.528 meters and it is one of the most beautiful lakes in that area. Due to its inaccessibility, it has remained untouched by humans and it is very rich in fish, Arctic char, and it also has a newt (triton), an endemic amphibian. The lake is about 480 meters long, 200 meters wide, and its maximum depth is 10 meters.

Borilovačko Lake, also known as Jugovo Lake, is the only artificial lake on Zelengora. It is surrounded by the peaks Kalelija and Stog and it is 250 meters long and 100 meters wide. It is located at an elevation of 1.450 meters and it is restocked with rainbow trout every year. In the immediate vicinity of Borilovačko Lake, in the west, there are seven tombstones stećci. One of them has the upper surface in the form of a roof with clear edges and is placed in the E-W direction, while the others are amorphous.